For the location of the project, due to favorable natural conditions, is selected the mountain Klekovača which is located in the western part of Bosnia Herzegovina, in the area of the Dinarides, with the highest peak Velika Klekovača (1,962 m).

It is named after healing evergreen plant from the family of pine Thuja, which inhabits the mountain top. It extends in a northwest - southeast, in length of 43 km, from the pass Oštrelj to the pass Mlinište.

Boundaries of the area TC Klekovača

According to preliminary results the population census, conducted in 2013, BiH has a population of 3,791.622, of which the Republic of Srpska has 1,326.991 inhabitants. The area where it is planned construction of a tourist center is uninhabited, and the nearest populated places are Petrovac-Drinić (within 5 km), Bosanski Petrovac (distance 15 km) Drvar (distance 40 km).

The economic potential of the area of the mountain Klekovača and its environment is recognized as far back as 1893 by the Bavarian industrialist Otto Von Steinbeis. Steinbeis 1898 began the construction of a modern sawmill with 17 power saws in Drvar and the network of forest narrow-gauge railway tracks and road from Drvar to Ostrelj and the Velika Kaldrma to Knin over Srnetica. In 1901 Steinbeis employed 2,800 workers, and until 1915 built a narrow-gauge railway, a distance of 550 km for the transport of goods and passengers. At the end of the 70s of the last century this narrow gauge railway was put out of use. 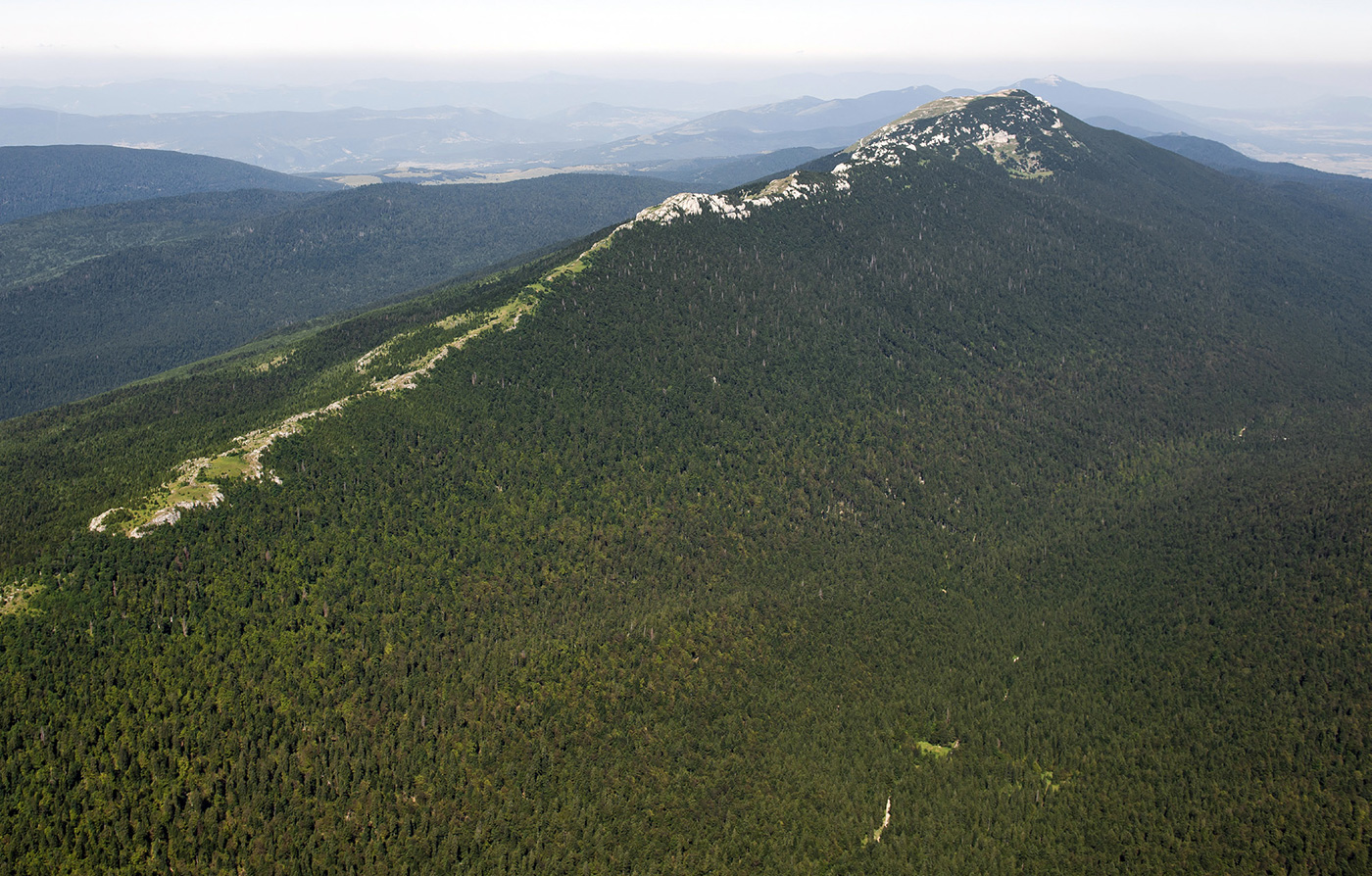 Mountain range Klekovača belongs to the central sector of the western Dinarids and third line of the Dinaric Mountains from the Adriatic Sea.

The whole area is very fragmented and is abundant in tectonic forms characteristic of the Dinaric karst: lower plateaus, slopes, ridges and peaks. The most prominent anticline, except the Klekovača are: Central Klekovača (1,804 and 1,779 meters above sea level), Small Klekovača (1,761 m), Lom-mountain (1,522 m), Double Kosice (1,471 and 1,467 m), Great Kosica (1,317 m), Jasikov palez (1.225 m), etc. Significant syncline is Šibovita draga and Lomska water. Throughout the area often resurface rocks in the form of flat plateaus, and sporadically occur vertical walls of rock long and tens of meters, which in certain directions restrict movement and construction of road network.

The northern slopes of the Great Kosica have a different morphology, rifled with the narrow basins of streams, which converge to form a stream Mračaj. This stream, in the upper part of the course is making its way through a small canyon that presents a significant geo-hydrological phenomenon. Very common are forms of surface karst erosion: sinkholes, semi-sinkholes and cracks, in some places and forms of micro-relief. Particularly impressive are ribbed cracks on bare peaks of Central Klekovača, that because of these ornaments, cut into vertical limestone cliffs in the right order, look like works of monumental sculpture. From underground forms of karst erosion are most often the caves and rock shelters less often and smaller caves. 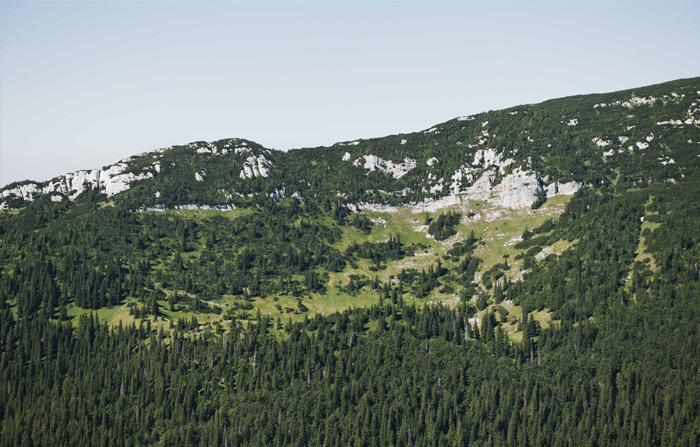 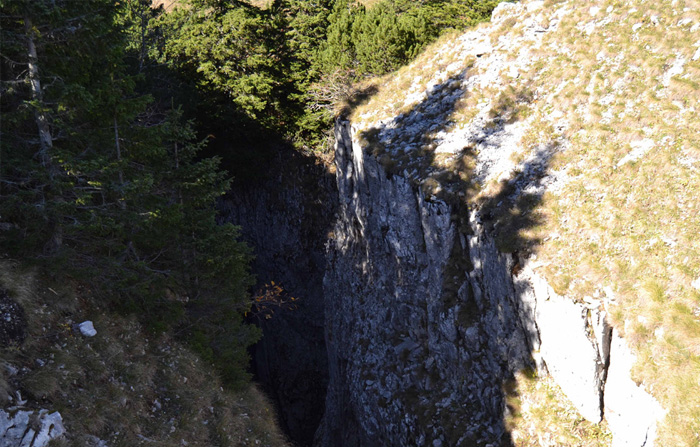 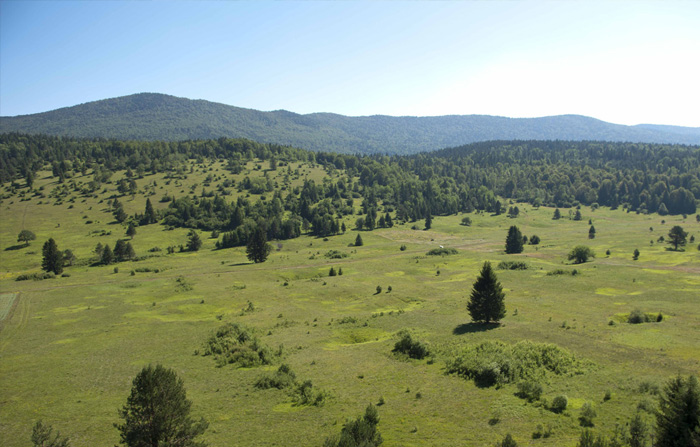 To the south is a vast glacial-tectonic field Kozila, similar syncline is found on the eastern part (cove). Between these two fields there is a rocky mountain range, parallel to the main, but lower (Crni Vrh 1,429 m, 1,384 m Lokveni Vrh, Kraljev Vrh 1,304 m).

Location of the tourist center Klekovača is optimaly positioned in relation to the content that should provide. Zone of ski facilities is oriented to the northeast, which is favorable in terms of longer retention of snow cover, and thus the longer winter season. Immediate zone of tourist center Klekovača - Kozila extends to an altitude of 805 m. in the central region, to 895 m. on the south side.

Area Klekovača is characterized by confrontation of continental and maritime air masses. The climate of this area is mountainous.

According to data from the previous period the estimated average annual temperature for the immediate location of the project is between 3 ° C for the area  1,500 m. above sea level to 8 ° C for the lowest parts of the area to Drinić. The largest absolute temperature in this area were measured in June and July 34 ° C and 35 ° C, and the lowest in January - 24.5 ° C.

The average annual rainfall in the zone over 1,400 m. above sea level is higher than the 1.500 mm, while for the rest of the area is from 1250 to 1500 mm. Precipitation is evenly distributed throughout the year, a minimum rainfall is in August. The height of snow cover on the Klekovača often amounts to several meters. In the area are the most common northern and southern winds. North wind or storm blows in December, January and February, a southern or white wind usually blows in April and November. The north wind is cold and lowers the air temperature by 3-4 ° C. South wind is dry and warm and on spring affects the melting of snow and the development of plant cover.

On the northern slopes of the mountain Klekovača in the evening and at night blows cold wind (local name "night wind") on the direction of Jasikovac-Kozila-Klanac-Drinić. In addition to the complex orography and altitude, on individual climatic elements such as precipitation, significantly affects and closeness of the Adriatic Sea.

In the course is monitoring of natural climatic factors in order to develop studies on the quality and therapeutic value of air as a healing factor. Namely, in order that a specific area is declared as an air spa, it is necessary to carry out a constant measurement of certain meteorological factors in a given time period. To obtain the average periodic values that should show that the air in this area has therapeutic value as a natural healing factor. 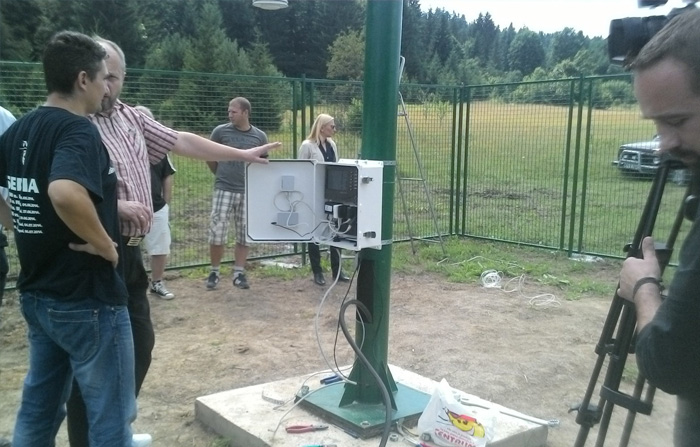 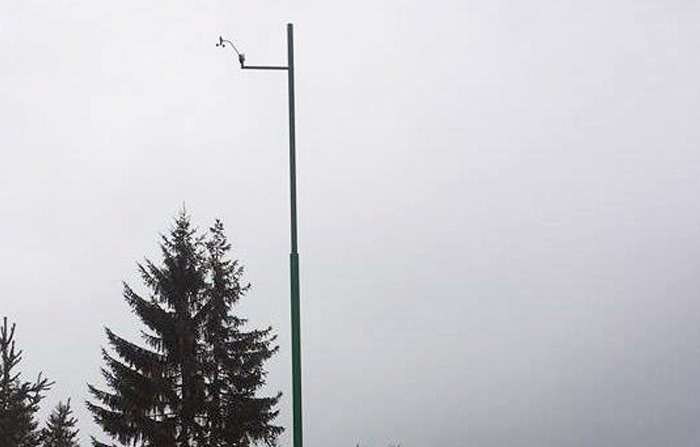 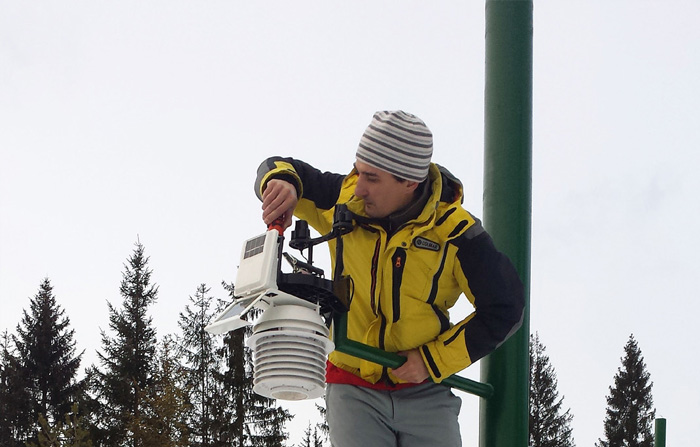 Investor in July 2014 installed at two locations - Kozila and Smrčeva poljana, (hotel complex - health center) modern automatic meteorological stations. They are in the HMI system of the Republic of Srpska, who is the bearer of the study on the quality and therapeutic value of the air-as medical factors.

Hydrological conditions in this area are related to its geological composition: limestone area is arid, while on the grounds of dolomite are present numerous springs and small surface streams. The occurrence of springs is related to contacts of limestone with dolomite. Major springs are: Klekovačka, Novakovic, Veliko vrelo, Suturlija, Ajzer pit and Lomska voda Ledenac and others. From surface flows most important streams are Mračaj stream and Crni creek. Besides them, there are a number of intermittent streams that after a short flow plunge into the ground.

The geological characteristics of the mountain Klekovača

The area Klekovača is constructed primarily of limestone cores, lower-Jurassic, middle-upper Jurassic, Cretaceous and lower-upper-Cretaceous age. The basic features of the said limestone are low content of insoluble residue (0.5-3%) of rocky, karst hydrology, underground relief substrate to which is connected and mosaic set of limestone soil. On the slopes of Klekovača are cliffs of limestone beneath which are the sandbanks. In Jurassic sediments prevail hygroscopic dolomites, then limestone and dolomite, and they turn into dark gray limestone with chert and black bituminous limestones.

The biological characteristics of the mountain

This area is characterized by an extraordinary biological diversity and habitat for a large number of endemic, relict and rare species of plants and animals and beautiful scenery. In this area is present more than 1,000 plant species, of which 9 species were registered as of international importance and 51 species as rare or endangered plants in Bosnia-Herzegovina.

One of the few rainforests in Europe, rainforest Lom, is located on the mountain Klekovača. Rainforests are for science invaluable, as custodians of biodiversity and pristine natural areas and laboratories for foresters, biologists and other researchers. Lom rainforest covers an area of about 300 hectares with trees of beech, fir and spruce aged 300-400 years. 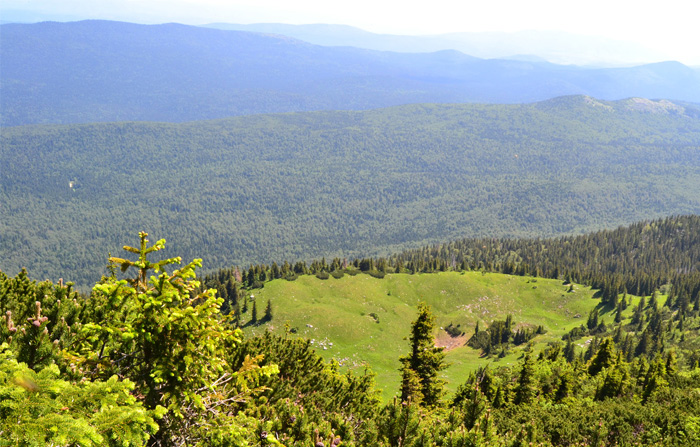 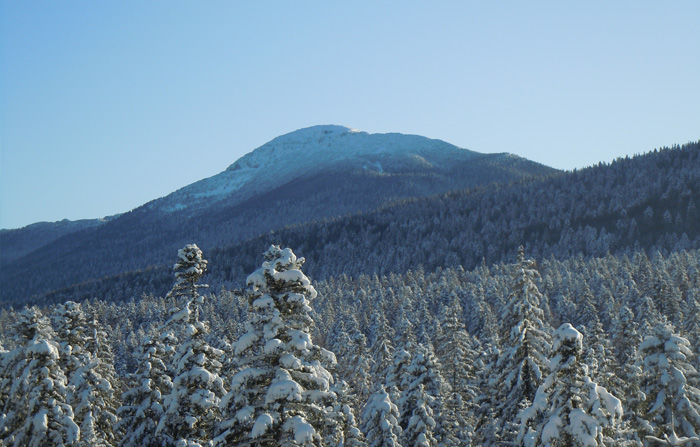 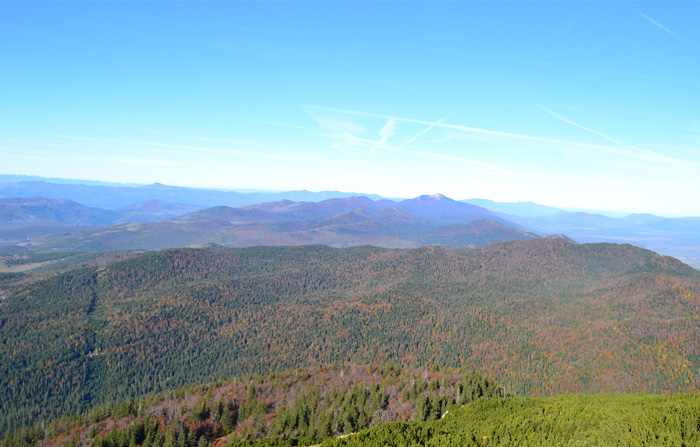 Forests of Klekovača are a special feature and it not only as a natural, but also as a landscape value. Their influence on the microclimate, with perhaps the most significant natural value, clashing continental and maritime air masses, as well as the altitude, make this area pleasant to stay in summer and winter. The forests are rich in oxygen and clean air which is enriched with iodine and has all the prerequisites for declaring the area an air spa, especially due to high ozone concentrations.

Landscape features of Klekovača represent one of the key values that influenced the choice of the location of the tourist center. Zones of the most valuable landscapes are: Kozila, Drinić, Lom-mountain, meadows around the cave Ledenica, Klekovacke Paljike, Kraljeve livade and especially the entire reef Klekovaca, from the so-called Petrovac bend, southwest of Great Klekovaca until Klekovacka . This area has a number of vantage points. The entire main ridge of Klekovača is a huge vantage point: from the top of the Great Klekovača, near the edge of Dinara, it is possible to see the Adriatic Sea. 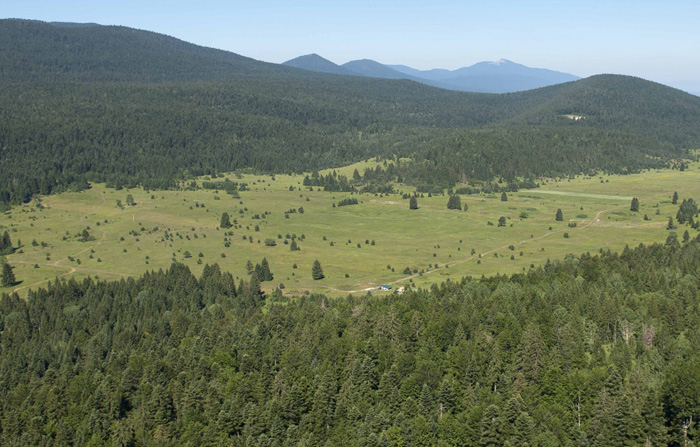 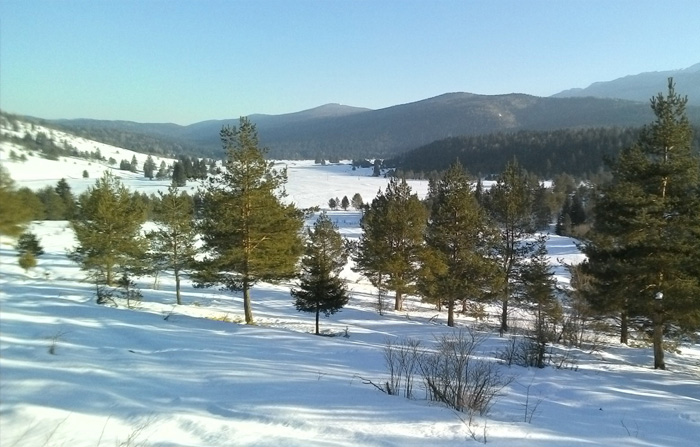 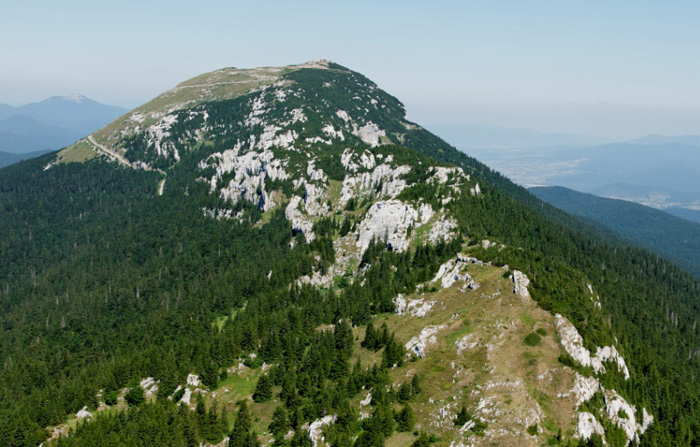 Central Klekovača a fantastic harmony of milky white rocks, dark green group of spruce, blue and green shrubbery and colorful summer growing season of high greenery. On Mala Klekovača can be seen sculpture parks: Mammoth, Guards (women with a view to the south). Mala Klekovača is in the opinion of most mountaineers most impressive area which is characterized by a set of rough rock. Kozila Plateau is a vast mildly ruffled field. In summer the field is covered with wildflowers surrounded by spruce and pine forests. 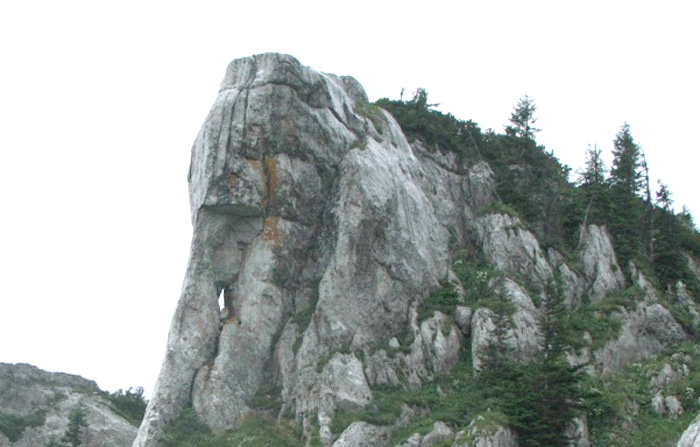 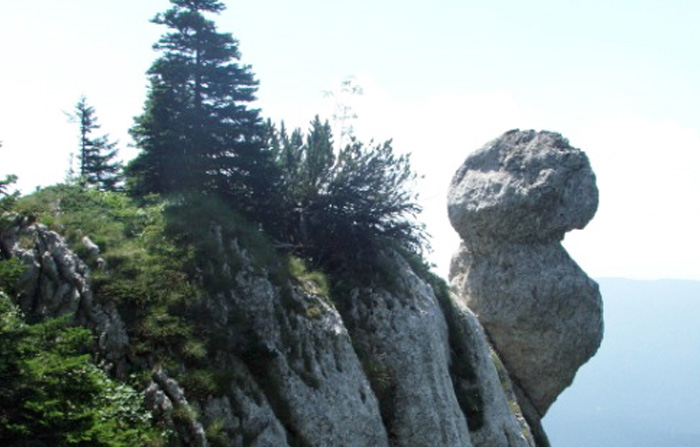 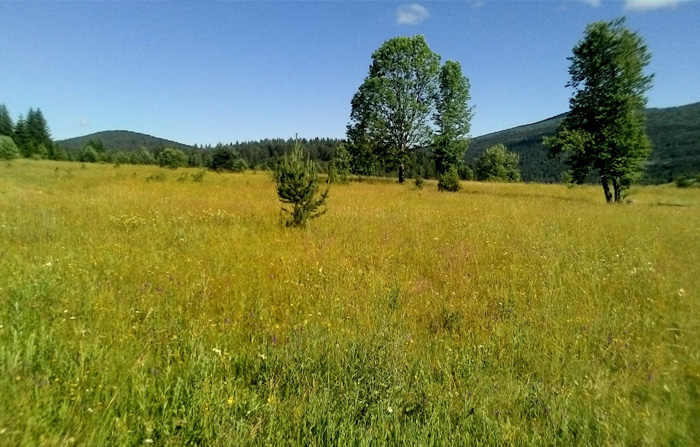